This tutorial will be mainly focused on making industrial objects in Blender. There will be screenshots provided of all the instructions seen in the tutorial. I will be making a Weapon Flash Hider as an example of this hard surface modeling tutorial.

The most important part of your 3D modeling is to have a good reference, if you are just starting out with Blender and modeling in general I would highly advise you to find blueprint images of the things you are making. I will use this Desert Eagle L5 Blueprint as an example to show how blueprints can help your workflow, since you can see everything you are making from three different directions, to gain more knowledge of the thickness of each part. I recommend you use the blueprints available on the-blueprints.com since they have a huge library of blueprints, from cars and ships to guns and missiles. 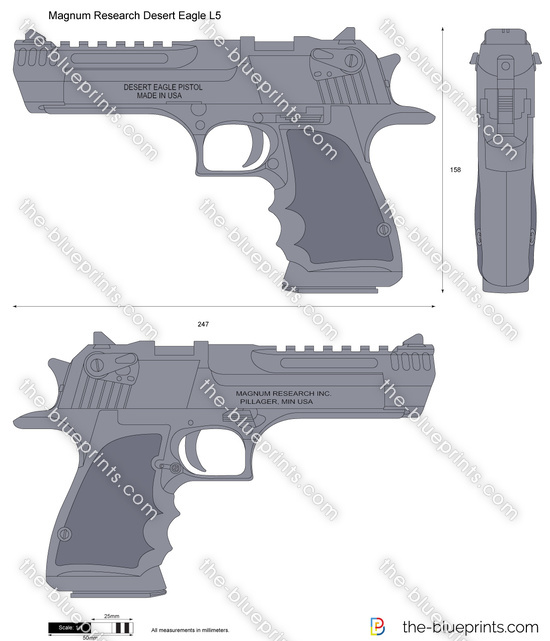 You will have to take a look at what you are trying to make from the reference you have, to determine the most common shapes used to make it. As you get more skilled, you will require less blueprint-like reference and more one-sided images of the wanted 3D model. I will show you on my reference what shapes I can spot used and I will point them out in an example. 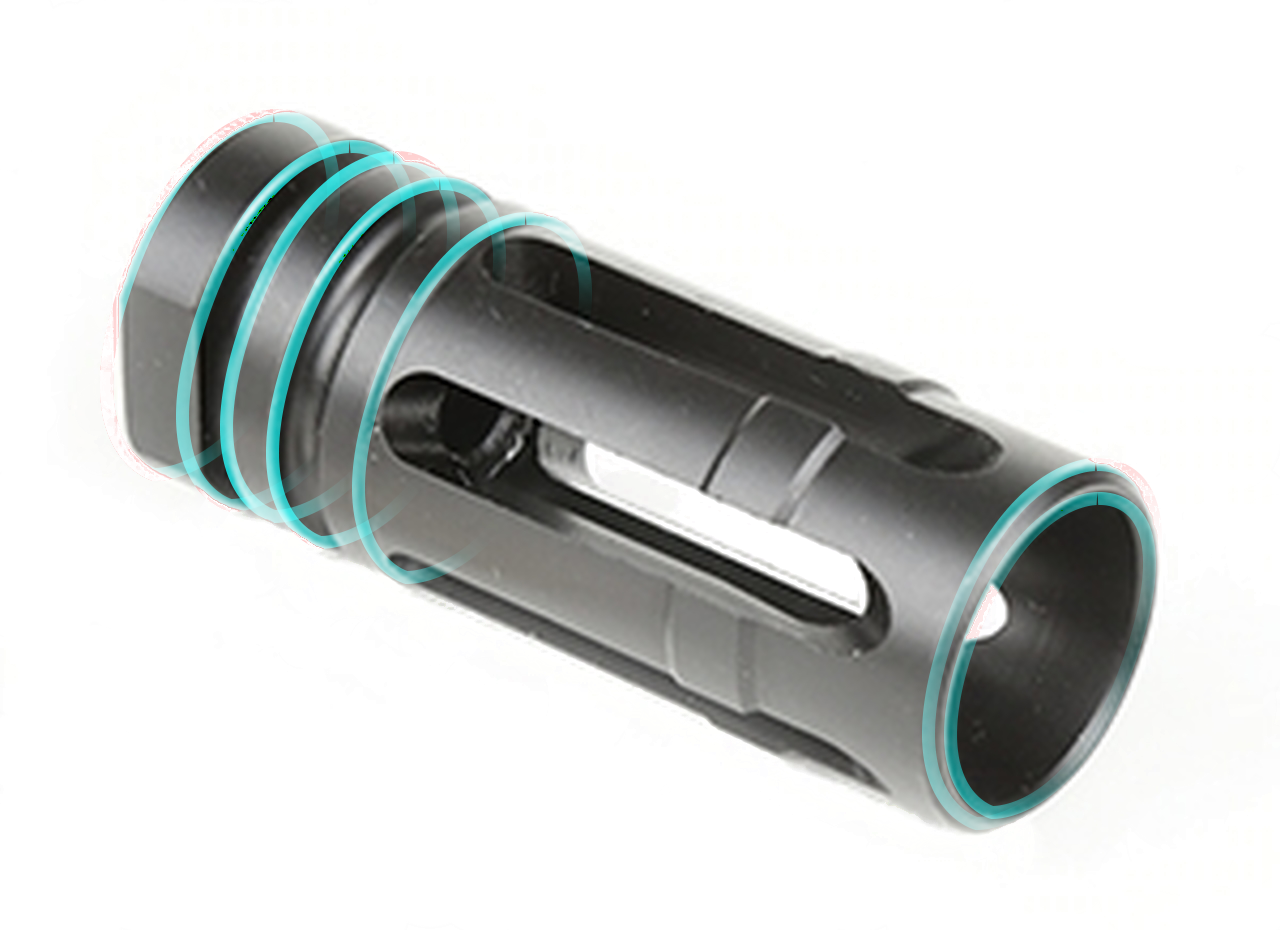 The most likely shape to start of with would be a circle since we see the pattern appear multiple times. But since the shape itself looks like an extended circle, the most useful shape in this example would be a cylinder. Now we don't want way too much detail in our model so we are going to reduce the number of vertices. 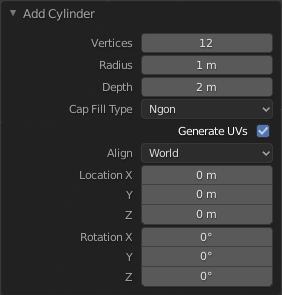 In Blender 2.7 you can access this by clicking T right after creating a cylinder but in Blender 2.8, all you need to do is extend the little tab at the bottom left corner of your 3D view.

This is the most important part of the tutorial, this is what makes your 3D model look smooth at the end, and what makes it look hard surfaced as well, it's very simple but makes massive changes. The first thing required to do is to select your starting shape which in my case is the cylinder and go to the Modifier Properties tab. 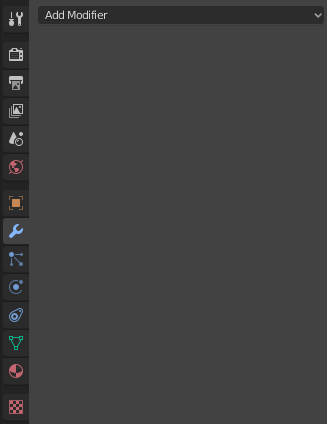 We will be adding a new modifier called Subdivision Surface Modifier, the modifier simply adds more vertices into your model. This modifier must be applied before exporting the final model! Now we can use this modifier in our favor, so we can make a low detailed model of the desired product but after applying the modifier, we will get a much more detailed 3D Model containing more detail and vertices.
When I say "Detail" I mean edge smoothness and to scratches and nonexistent details. 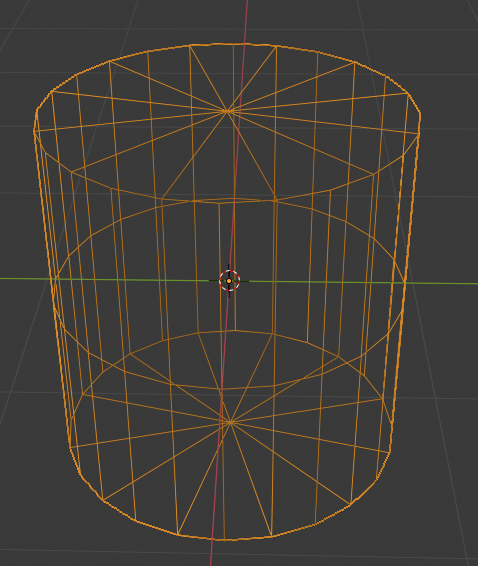 Now to make the final model more smoother and detailed we need to increase a few options in the modifier. You will mainly need to focus on the "Viewport" option, which you will increase to 2 or 3
And trust me, no more than 4 is needed since, after 5 or more, you will reach around a few million vertices and the software will start bugging out. 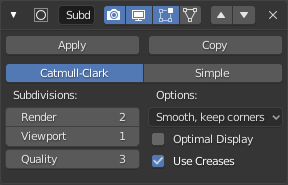 If you picked a blueprint image, then feel free to add the image into your 3D view so you can trace it with ease, and worry less about missing details. In Blender 2.8 features are included in the Add Shape tab, which includes options such as Background images, Reference images. 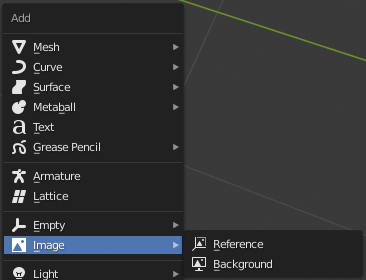 If you didn't pick a blueprint image and you are following the idea in your head, from an image you saw on Google or imported into the UV Editor, then start following the shape and turn off the subdivision option seen in the modifier, to make the workflow easier in Edit Mode.

And select the edges that are in the reference shown as sharp, and now click Shift + E to mark how much the edges you have selected are sharp. Be careful since the number goes from 0 to 1, you can make this decision by dragging your mouse or typing in the number after clicking "Shift + E". Typing the numbers in, is a way preciser way to adjust edges. Now putting the sharpness of the edges to 1 will show the old shape of the undetailed model, so avoid using the maximum value, unless you want it to be flat. 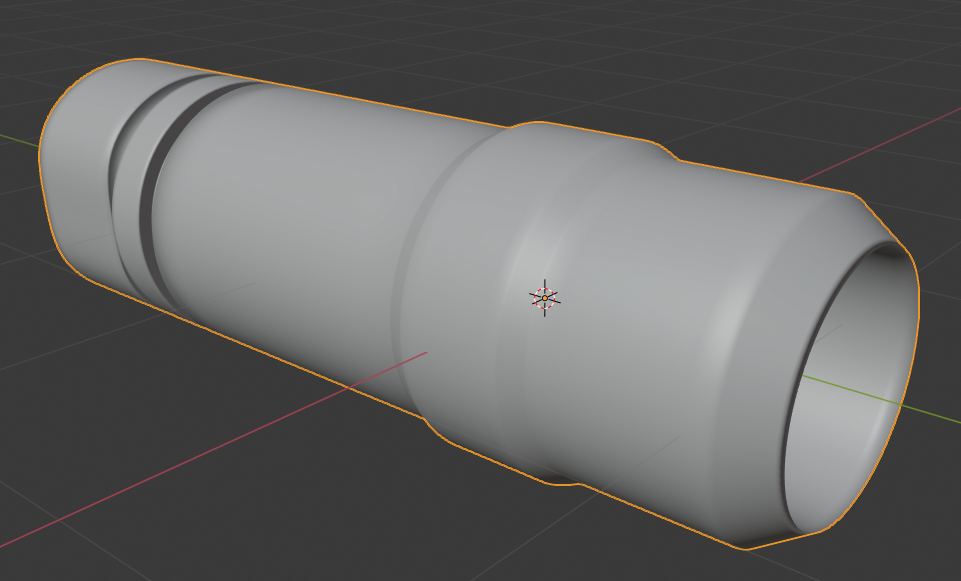 I only used the Edges that form the circle, and are facing the Y coordinate. I have used the maximum number since this isn't aimed to be as realistic as possible since most of the illusion will be made by the texture, I will make the holes inside by merging the outside faces with the ones inside since the other option is to use Boolean Modifier, which usually makes a mess out of the topology.

Now you may notice that the non-detailed model that I started with isn't, showing marks as I said it would, the reason is that selecting only two edges connected to a single vertex. Whereas if I connected 3 or more edges and made them flat, the old model would reflect its "details" onto the detailed one. 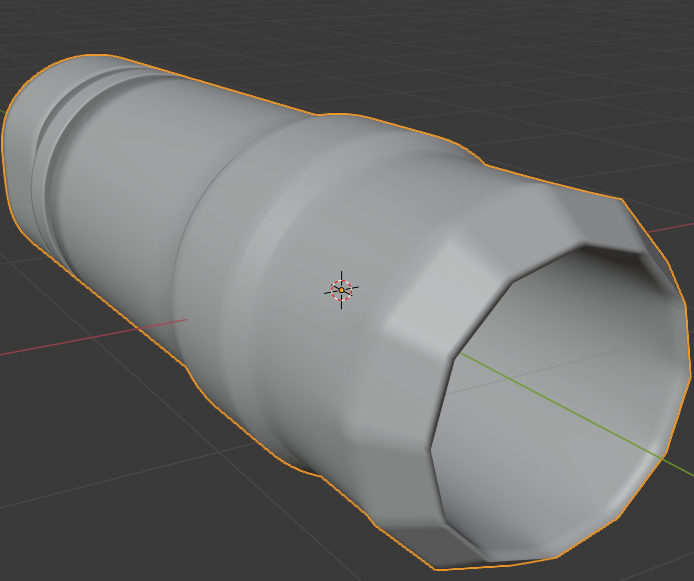 Now to fix the light to acting naturally around Sharp Edges, in previous versions of Blender, you needed to select the edges and apply an option called "Mark Sharp" but thanks to a new feature called Auto Smooth, we can automatically make all sharp edges act correctly. 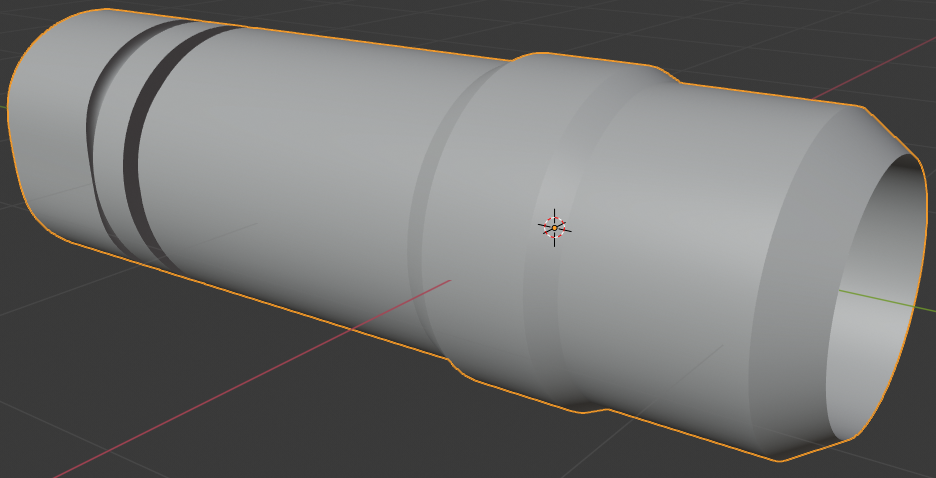 The feature is found in the Object Data Properties, under Normals. And it makes this long and boring process very easy and fun. You can even adjust the angle of the edges required to mark them as sharp. 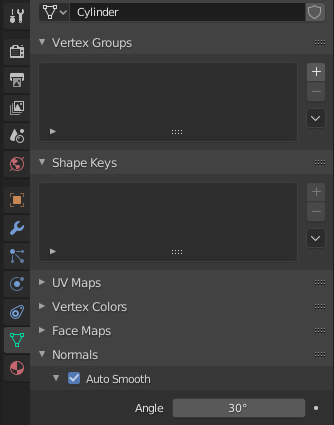 Now for the flat part of my Flash Hider, I will show you how you can make certain parts flat, even with the modifier still being applied. 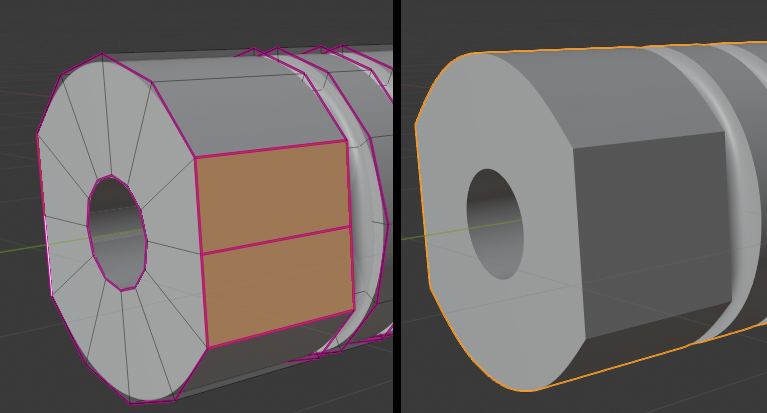 The most frequent problem happening with hard surface modeling is the model itself, or just a part of it, simply not looking normal or well shaded. This problem is caused by the Faces of the model, or even a single face not facing the correct way. Now, why is the orientation of the face a problem? Well the front part of the face is made to absorb light and the back of the face is simply inside the model and cant be seen, so it doesn't require to light up or bounce the light correctly, so it might seem as if it's bouncing it the opposite way of normal. And the way you can check the model for this problem is simply turning on Face Orientation view in the 3D View options 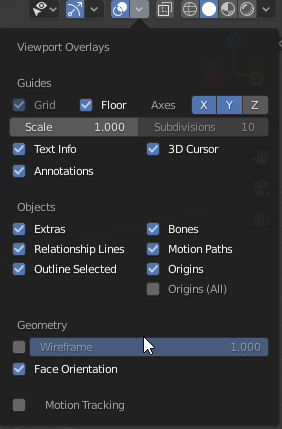 If all of the faces on your model are completely blue, this means your model is well shaded and the faces are well oriented. If your model does appear to be read on any place at all, go into Edit Mode, select the faces that are shown as Red, and click CTRL + N. If the face stays red then go to the options of the keybind and click "Inside".

The second most occurring problem

If you merged two faces or edges, in a rather bad way, which can happen because of previous bad habits. This can lead to the lighting of the model acting weird. 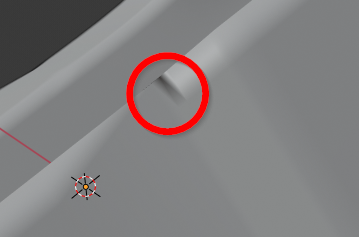 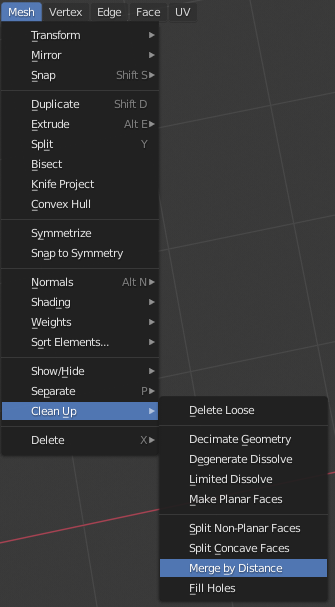 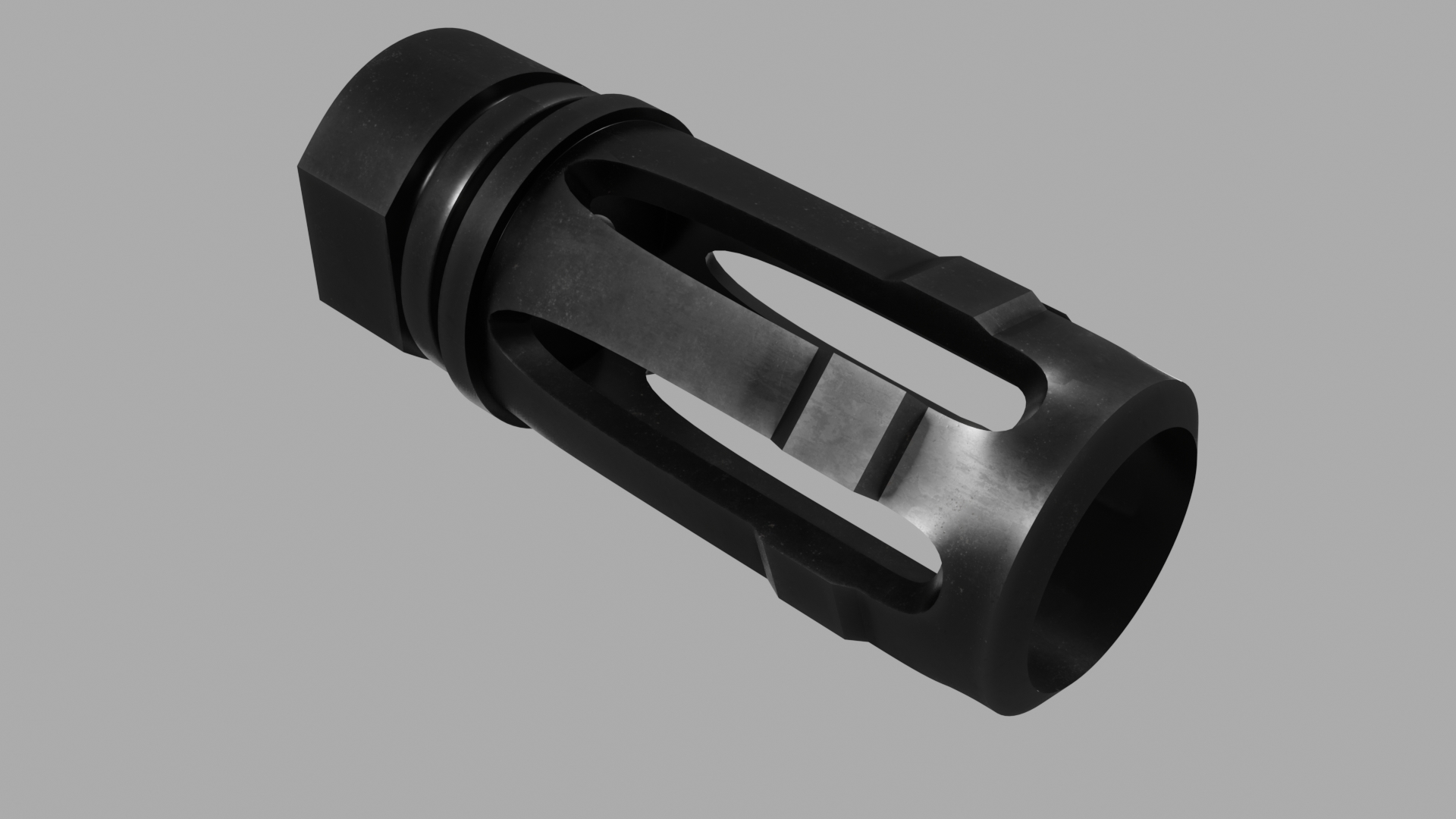